Carey was 49 years old when I first saw her. She was referred to me by one of her healthcare providers for Lyme disease testing because she had been experiencing neurological symptoms consistent with multiple sclerosis for the past year. Carey had seen multiple neurologists in the San Francisco Bay Area for proximal muscle weakness, primarily in her legs and arms. It turned out her multiple sclerosis-like symptoms were not caused by tickborne infections but by mold and mercury toxicity.

Carey was relatively healthy growing up. She played sports throughout high school and reported no significant health issues until her 20’s. In college, she had frequent strep throat and had a chronically swollen lymph node after college, which ended up being surgically removed. Lymph nodes are part of the immune system and increase in size with infection or toxin exposure. In her 30s, Carey began to experience recurrent headaches that eventually turned into migraines. Carey started to get sick frequently in her 40s with chronic sinus infections as she often traveled for work.

Interestingly, Carey’s boyfriend, in her 20s, ended up suffering from Lyme disease. She was concerned her neurological symptoms may have resulted from him transmitting the bacteria that causes Lyme disease to her.

Was it Multiple Sclerosis?

Carey first noticed a soreness on the lateral sides of her legs after a walk a year before seeing me. A few weeks after the onset of symptoms, her legs became stiffer. She did not worry too much about these symptoms because she was very active. However, a few months later, she started to experience difficulty standing from her desk chair. The muscle weakness in her legs was very concerning, and she requested a standing desk at her office.

As time went on, Carey began to notice other symptoms surface, like shoulder pain. She started to see a physical therapist in hopes of resolving her symptoms, but unfortunately, they progressed. She began waking an hour earlier than usual so she could stretch her muscles before going to work. Carey also began to notice occasional urinary incontinence and muscle tremors.

Carey became very concerned when she could no longer move her legs while lying in bed. She would have to use her arms to shift her legs throughout the night.

When I met Carey, she could not get up from a seated position without using her arms and had to use a handrail going up and down stairs. This was a significant physical setback for someone who had a strong yoga practice just a year prior.

Carey’s general practitioner referred her to a local neurologist who performed a series of tests. An MRI of her cervical and lumbar spine demonstrated bulging discs but did not explain her symptoms. An EMG (electromyographic nerve test) was performed, which detected radiculopathy consistent with a pinched nerve.

Carey’s thyroid stimulating hormone (TSH) and thyroid antibodies were elevated on a blood test, indicating autoimmune thyroiditis. She also had positive autoantibodies for Sjogren’s syndrome, characterized by a dry mouth and dry eyes. The thyroid and Sjogren’s antibodies reflected Carey’s immune system was dysregulated and had begun attacking her tissue.

A 24-hour urine collection yielded elevated arsenic levels. Arsenic has been associated with oxidation and resultant multiple sclerosis.  The general inflammatory markers ESR and CRP were in the normal range. She was also tested for an autoimmune condition called myasthenia gravis. The results were negative.

The neurologist referred Carey to a university hospital neurology department in northern California for further workup. Another EMG study was performed and concluded Carey had myopathy, which is a general term muscle dysfunction leading to weakness. A biopsy of her leg muscle was also performed and showed “mild chronic neurogenic changes.”

When I met Carey, she had already been through a battery of diagnostic tests by neurologists. No one knew what was causing her symptoms, so I would not look in areas that the previous testing had explored.  In addition to the Lyme disease testing that Carey was referred to me for, I wanted to rule out other toxicant exposures contributing to neurodegenerative conditions.  Carey’s health history clued me in on a couple of environmental exposures I wanted to test.

She was experiencing recurrent sinus infections and reported some of her colleagues at work were frequently getting sick with upper respiratory symptoms. This led me to want to rule out mold toxicity as a possible cause of her symptoms. As a yoga practitioner, Carey was mindful of eating healthy. She did not eat red meat or chicken, so she ate a lot of fish. Larger fish accumulate mercury, and Carey had elevated arsenic levels, so I ordered a provoked urine toxic metal panel.

Mold and Mercury as Cause of Multiple Sclerosis

When I received Carey’s lab results, I was shocked by the findings. The comprehensive Lyme disease and co-infection panel from a specialty lab was normal. Her provoked urine toxic metal panel came back with elevated mercury levels. The most commonly used laboratory for heavy metal testing does not have an established provoked reference range. When 30mg/kg of DMSA is used as a provoking agent for a 6-hour urine test, mercury should be below 20 micrograms per gram of creatinine. Carey’s was 47. Mercury can also cause elevated thyroid antibodies which Carey had.

The hallmark feature of multiple sclerosis is the demyelination of nerves that results in symptoms associated with neurological function. Myelin is a protective layer around nerves (similar to the protective rubber coating on an electrical cord) that increases never signaling. When myelin is damaged, nerve conduction is compromised.

Various mechanisms have been proposed as causes of multiple sclerosis. Likely some are involved in creating the perfect storm that results in the manifestation of symptoms.

The interplay between genetic and environmental factors such as toxins, infections, and the immune reaction creates the greatest likelihood of developing multiple sclerosis.

Mold as a Cause of Multiple Sclerosis

Mycotoxins produced by molds have been shown to damage cells in the central nervous system, including the cells that support myelin. Mycotoxins cross the blood-brain barrier and directly damage nerve cells. The damaged cells release debris that triggers an immune response creating more oxidative damage. The mycotoxin gliotoxin has been shown to cause nerve cell death and demyelination in research studies.

A 2018 article demonstrated astrocytes, the glial cells integral to the pathophysiology of multiple sclerosis, took up mercury in a man who had been injecting himself with mercury. The researchers also found other neurological tissues in the central nervous system contained mercury.

A Protocol to Reduce Mold and Mercury

I started Carey on an oral and intravenous protocol for her high mold levels. She had her house professionally tested for mold, and the results were negative. My suspicion is the building Carey worked at in downtown San Francisco likely had water damage and subsequent mold growth. Water or moisture can come from various sources, including the HVAC in a large commercial building. She left her job when her health deteriorated, so we knew she was not currently being exposed to mold in the workplace.

For Carey’s elevated levels of mercury, I prescribed an oral and intravenous chelation protocol. She stopped eating larger fish such as ahi and tuna that are known to contain mercury.

Treat the Cause, Not the Symptoms

Within a couple of months of treatment, Carey began to notice her muscular strength returning.  She reported she has been able to do walk further and do more yoga than previously. She also said going up stairs was considerably more manageable.

A couple of months later, when I saw Carey, she said her mobility is “night and day” better than had it been before treating mold and mercury toxicity. She still used a handrail going up stairs, and her arm and leg strength had not returned to normal, but she was able to do more activities around the house without muscular fatigue.

At a follow-up visit at the university hospital, the neurologist wrote in Carey’s chart, “it’s possible that some of her prior weakness was secondary to fatigue rather than weakness. A prior exposure that has passed is also possible…” Mold and mercury toxicity turned out to be the cause of the neurological disorder.

At her last visit, I recognized a significant improvement in Carey’s health when I walked with her from the waiting room. Her pace was relatively slow in the past, and it would take some time to get to my office. Not this time. She stood up from the waiting room chair and walked alongside me at my pace. It had been a year and a half since I met Carey and a couple of years into her journey with a debilitating neurological condition. She had made changes in her life, committed herself to regain her health, and continued to seek medical care until she got to the cause of her illness. 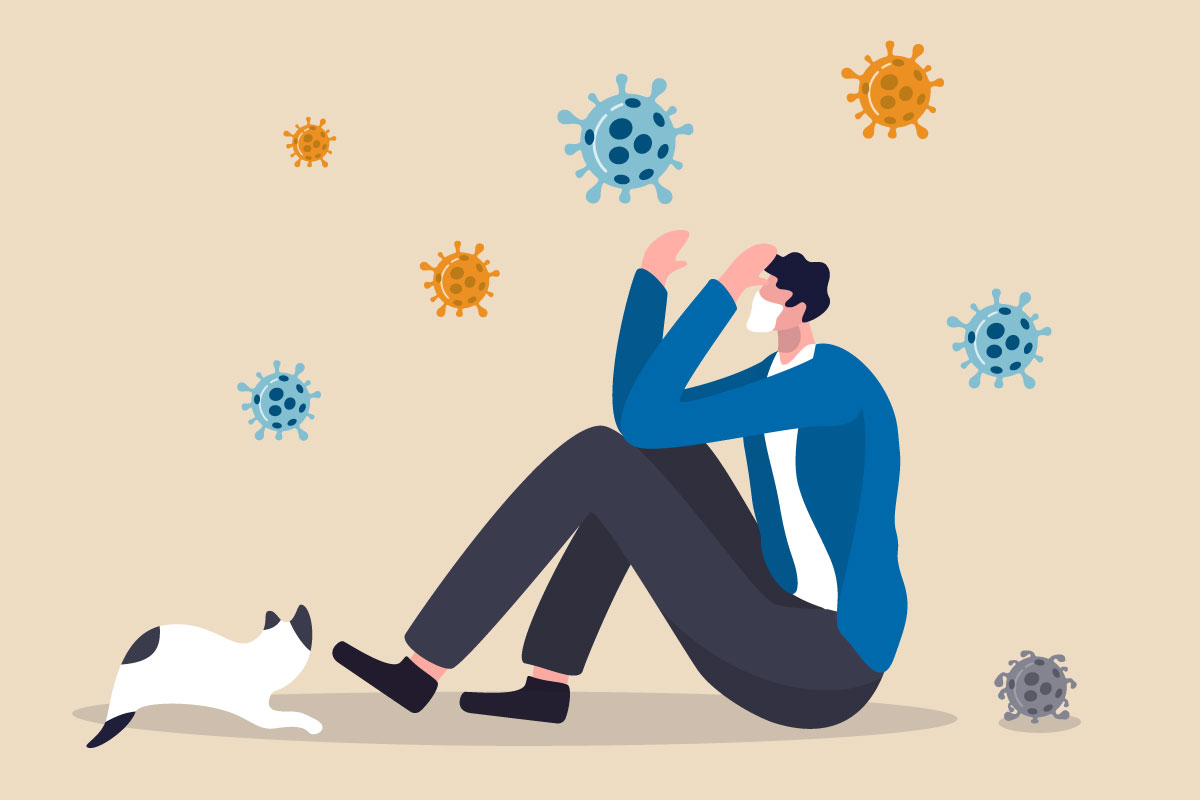